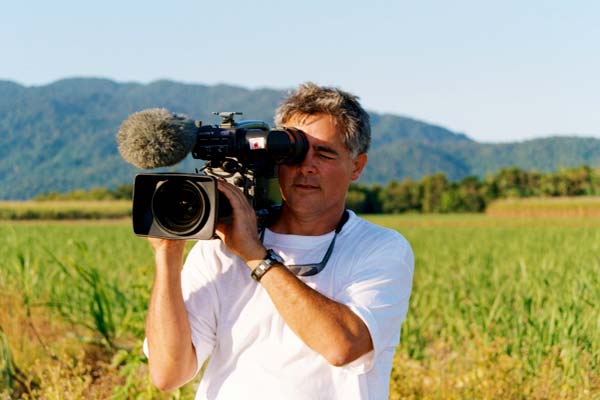 Batty’s career spans 34 years of writing, producing, directing and shooting documentary throughout most parts of Australia and PNG.

David’s love for the bush and remote Australia has provided an array of great characters and a rich palette to ply his storytelling skills. His films display empathy and rapport derived from deep trust and local knowledge. With seven TV series, five one hours and over two hundred short form docs David’s films entertain, and give insight into rarefied worlds.

Based in Alice Springs for 13 years, then Broome for 12 years and now living between his studio in Melbourne and his property on the South Coast of NSW, Batty has a long and distinguished history of making programs with and for Aboriginal people. His filmmaking career began around 1982 in Alice Springs where he established the TV production unit at CAAMA (Central Australian Aboriginal Media Association).

Batty is well known for his hit television series, “Bush Mechanics” which reached an audience of over three million viewers. Recent projects include directing “Coniston”, the story of Australia’s last massacre of Aboriginal People in Central Australia and the Web Series “Black As”, which tracks four young men and their wild adventures across Arnhem Land.

Jeni McMahon has spent the past twenty years doing what she loves most, producing memorable and meaningful factual content throughout Australia. As a producer at Rebel Films and a former investment manager at Film Victoria, Jeni has worked with many of Australia’s leading documentary filmmakers. At Film Victoria she was involved in the development and financing of over 80 projects, from feature docs, television one-offs and high-end factual series as well as narrative features and television drama. She has a deep understanding of how the industry works from both a creative and financial perspective.  As an independent producer, she has worked closely with Indigenous communities to create iconic series such as Bush Mechanics and more recently the Black As web-series, which has garnered over 200 million views online.

With over 20 broadcast credits for ABC and SBS, career highlights include the much loved Bush Mechanics and Black As series, the multi-award winning documentary Then the Wind Changed (2012 Walkley, 2012 ADG Nomination, 2013 ACCTA, 2013 Logie Nomination) and the doco-drama Coniston (2012 ATOM) and the production of Marree Man, Australia’s first made for mobile documentary “mobi-doc”, finalist at the 2007 Mipcom Mobile and Internet TV Awards.

Of producing she says ” there’s nothing I enjoy more than being on the road and in production. We’ve had the privilege to work with some amazing people all over the country, sometimes people who you meet for only a short space of time but who nevertheless open up their world to you. That’s the highlight of documentary filmmaking for me – making those connections and allowing people to speak in their own voice ”